This park has been classified on November 8th, 1972.

Before 1868 its area consisted of agricultural terrains with humid grounds and a forest area of more than 15 hectares owned by the Civil Hospices of Brussels.

Having a surface area of more than 71 hectares, the park is provided with water by the Woluwe and its tributaries.

The park’s landscape was conceived in English style by the French landscape architect LAINE. His successor, Louis VAN der SWAELMEN, developped the idea of a park with a landscape in English style, by respecting an essential law: the natural habitat of the plants. Completed in 1906, the park is a true arboretum containing rare species, such as the Japanese sophora (Sophora japonica), the Chinese cedrela (Cedrela sinensis), the Japanese zelkowa, the Colorado fir …

The animal life of the park consists of several kinds of birds, such as amongst others: ducks, swans, gulls, grey herons, Egyptian gulls …

In 1883, François Mellaerts and his wife Antoinette Vandenmoortel buy a collection of terrains located in the valley of the Woluwe during a public sale. In 1898, the Mellaerts couple, “salesmen living in Woluwe-Saint-Pierre”, exchange some terrains with Edmond Parmentier, the contractor who had been appointed to construct the Avenue de Tervueren. More concretely, Parmentier needed the terrains, necessary for the development of the Woluwe Park and the modification of the (Woluwe) river’s bed. In this context, the Mellaerts couple accepted to dispose of nearly 4 ha of terrains consisting of “dikes, ponds, grounds and buildings”.

During the 1880s, François Mellaerts ordered the digging of ponds and the construction of a house with outbuildings.

It was arranged with Edmond Parmentier that the house would be pulled down, once a new one (still here today) would be constructed “at a distance of twelve meters from the new roadway” (the Boulevard du Souverain).

The notarized deed contained some interesting details: for example, the Mellaerts couple (and their successors) commited themselves to let “the ponds remain in perpetuity; to never build along the new avenue de Tervueren and to never erect a building in this region, nor to plant anything that could block the view on the ponds or that could inhibit the view from any of the view points to be established at this location”.

Furthermore, it was stipulated that bathing in the ponds was prohibited ! In return, the State committed itself to ensure the maintenance of the ponds and the terrains, which the Mellaerts family would make publicly accessible by opening a restaurant and a boating establishment.

In 1902, the construction of the boulevard du Souverain began, which lead to the separation of the Mellaerts ponds from the Woluwe park.

With its two ponds, the park covers an area of 8 hectares and is ment for leisure activities: there are still people who go (pedalo) boating on the water; a minigolf course has been constructed near the restaurant.

The ponds have been classified since November 18th, 1976, and are inhabited by a considerable amount of different bird species: amongst others the Eurasian coot, the grey heron and the Egyptian goose, … nest in this area. 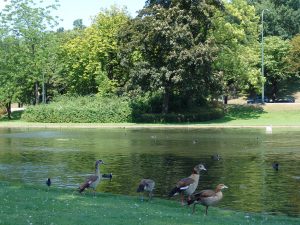 The whole park has an area of 13 hectares, was originally conceived in the English style and has been classified since December 7th, 1981.

Situated at the corner of the Avenue Parmentier and the Avenue des Orangers, this former property of Edmond Parmentier was bought by the Belgian State in 1919, and has been the location for a revalidation centre for war invalids (1914-1918) and a military hospital with workshops for professional training and housing up until 1925. From 1930 onwards, this estate was put to the disposal of the abbot FROIDURE and it is still occupied by the “Stations de Plein Air” today. In the park, one can find interesting species of trees: red oak (Quercus rubra), giant sequoia (Sequoiadendron giganteum), ….

The park used to be a property of the order of the Franciscan Missionary Sisters of Mary. In 1973, the religious community sold a parcel near their convent between the avenue de Tervueren and the rue François Gay to the municipality. The municipality passed it on to the company MONSANTO, (located at n° 270) under the condition that they would open the lower part of the terrain for the public. This park has a surface area of 75 ares and is the habitat of Northern Red Oaks (Quercus rubra), and European beeches (Fagus sylvatica)…. The park is managed by the municipality. 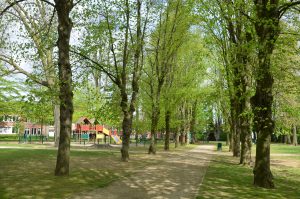 The foreigners’ registration office by appointment

In order to provide a more efficient service and to avoid long waiting times, the foreigners’ registration office of the municipal administration now operates by appointment. The platform for making an appointment for all your administrative procedures is available via this page.